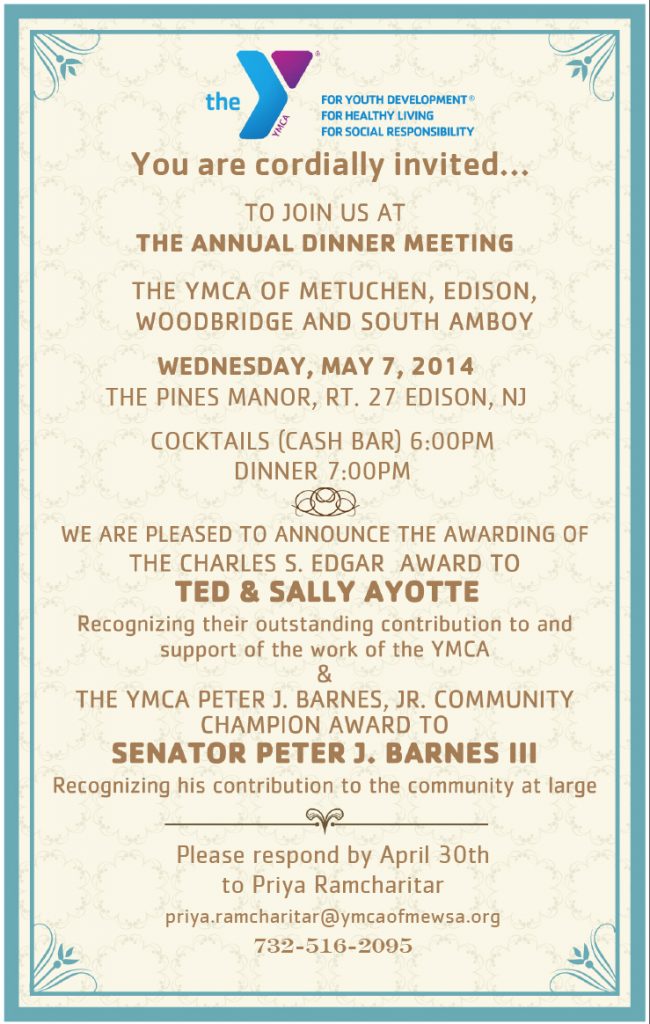 It is with great excitement that the Metuchen Edison Woodbridge YMCA announces the selection of three prominent and influential community members to receive the Peter J. Barnes, Jr. Community Champion Award and the Charles S. Edgar Memorial Award.
The YMCA Peter J. Barnes Jr. Community Champion Award will be presented to NJ Senator Peter J. Barnes III for his contribution as a public official to the mission of the YMCA and to the community at large. Senator Peter J. Barnes III represents the 18th Legislative District, comprising the communities of East Brunswick, Edison, Helmetta, Highland park, Metuchen, South Plainfield and South River. A resident of Edison for more than 50 years, Peter has previously served on the Edison Township Council, Planning and Housing Authorities. He is a Past President of the Middlesex County Bar Association and Past President of the Metuchen Rotary Club. Peter attends St. Francis Cathedral in Metuchen, New Jersey where he is a member of the Parish Council. He has also served as a youth coach for the North Edison Baseball and Softball League, YMCA of MEWSA, and St. Francis CYO.
The Peter J. Barnes, Jr. Community Champion Award recipient is a person who:

Theodore and Sally Ayotte will be honored with the Charles S. Edgar Award for their outstanding work as YMCA volunteers and community supporters.
Ted Ayotte served on the Metuchen Police Force for 25 years. Ted has also been the Metuchen Police Department liaison for the Special Olympic Torch Run during his service on the Force.
He currently serves as Vice Chair of the Metuchen Y Branch Board. He volunteers at the Janice Garbolino 5K run and fundraises for the Hale Memorial YMCA Charity Golf Classic. He also volunteers in his community of Metuchen at the Memorial Day Parade, Winter Festival and Junebug Art Fest.
Sally Ayotte is an active member of 1st Presbyterian Church – Elder/Deacon where she serves as a Trustee and Sunday School teacher. She is also a member of Philantrophic Educational Organization (PEO) – a philanthropic organization dedicated to providing women with scholarships and loans for higher education.
They are both on the Board of Beringer House (this is how Sally and Ted met, serving on the Board together) and avid YMCA members. Both are wonderful philanthropists and supporters of the YMCA of MEWSA.
The Charles S. Edgar Award recipient is a person who:

Senator Peter J. Barnes III and Theodore and Sally Ayotte will be honored at the 2014 Annual Dinner Meeting of the YMCA of Metuchen, Edison, Woodbridge and South Amboy on Wednesday, May 7th, 2014 at 6:00PM at the Pines Manor in Edison, NJ. Cost: $65.00
For more information or to purchase tickets, contact Priya Ramcharitar, Financial Development Assistant732-516-2095 priya.ramcharitar@ymcaofmewsa.org