Tue, 14th June 2011, 7:00pm
Metuchen Assembly of God
130 Whitman Ave, Metuchen, NJ 08840
732-549-4163
Watoto Children’s Choirs have travelled internationally since 1994 as advocates for the estimated 50 million children in Africa, orphaned as a result of HIV/AIDS, war, poverty and disease.
Accompanied by a team of adults, the choir presents Watoto’s vision and mission through their stories, music and dance. Watoto choirs act as ambassadors to raise awareness about the plight of the orphaned and vulnerable children of Africa.
Issues such as poverty, HIV/AIDS, the effects of war and the child soldier crisis in Northern Ugandan are highlighted.
Each of the children in the choir has suffered the loss of their parents either through war or disease. They live in Watoto children’s villages. The experience gives the children exposure to other cultures broadening their worldview. It also gives them confidence and boldness and helps them rise up out of their own situations of sadness and despair.
The choirs have toured Uganda, Kenya, South Africa, Australasia, Canada, UK, Germany, France, USA, South America, Hong Kong, China and Japan.
Their audiences have included princes and paupers, warming many hearts wherever they go.
Some Of Watoto Children’s Choir Highlights 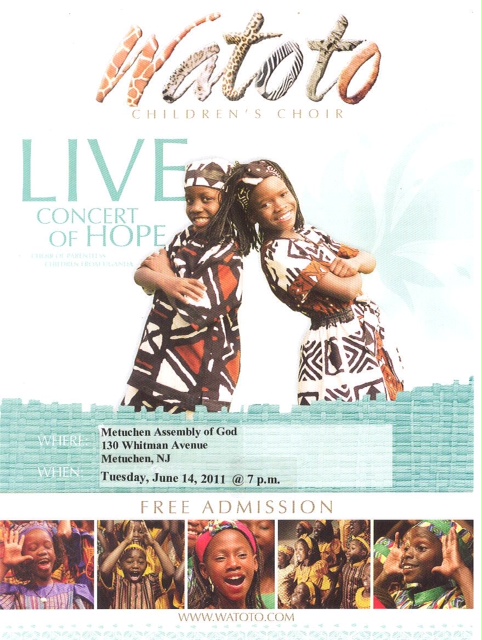 Watoto Child Care Ministries: Providing Holistic Care for Orphaned and Vulnerable Children And Women in Africa since 1994
Watoto is an holistic care programme that was initiated as a response to the overwhelming number of orphaned children and vulnerable women in Africa, whose lives have been ravaged by war, poverty and
disease – particularly HIV/AIDs.
In sub-Saharan Africa, the HIV/AIDS pandemic has orphaned more than 14 million children (UNAIDS Global Facts & Figures 2008). According to World Hunger Facts 2009, 11 million children die each year before their 5thbirthday.
Watoto is positioned to rescue an individual, raise each one as a leader in their chosen sphere of life so that they in turn will rebuild their nation. The model includes physical care, medical intervention including HIV/AIDS treatment; education – formal and vocational; counselling and emotional wellbeing; and moral and spiritual discipleship. Watoto fulfills these goals by building children’s villages and restoring hope and dignity to vulnerable women, most of them HIV+, widows and former victims of
civil war.
Watoto is currently operating out of Uganda, East Africa where over 2,000 children and infants are cared for in three children’s villages and babies’ homes. 2,100 women are empowered through Watoto’s Living Hope initiative.
After establishing a credible and successful model caring for orphaned children and vulnerable women over the past 17 years in East Africa, Watoto is expanding its operations out of its home country, Uganda and into Southern Africa on 1 May 2011.