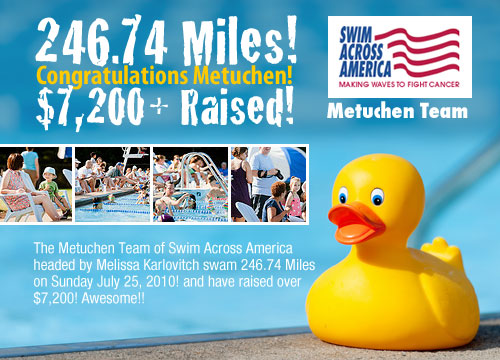 With the miles gained in Sunday’s swim, the Metuchen team has gone beyond its goal of swimming to the Ohio border – they’ve gone past it! This is the most miles they have ever put up at this event, and the team has surpassed their first two years combined by over 60 miles.
The organizer’s goal was to get 100 swimmers in the water, they ended up with 122 swimmers participating which is their best attended event so far, with excellent turn out from swimmers, coaches, parents and friends. As of Sunday night the team has raised just over $7,300 for cancer research. Director of the event, Melissa Karlovitch mentions they are still accepting donations through the end of next week and these totals do not include the money from the ‘dough raiser” fundraising they are doing with Uno’s on Rt.1.
“Many of the young kids today are new swimmers and could barely swim more than a few laps when practice started in June. Today, 110 of swimmers swam over a mile, and 30 of this group brought in over 3 miles each. It’s simply amazing when you see an event like this.” she concludes.

Video slideshow of Swim Across America by Chris Morrison Swim Across America, Inc., [SAA] is dedicated to raising money and awareness for cancer research, prevention and treatment through swimming- related events. With the help of hundreds of volunteers nationwide and past and current Olympians, SAA is helping find a cure for cancer through athleticism, community outreach and direct service.
Since 1987 SAA has grown to hold dozens of events all over the country, each with its own distinct personality. You can swim under the Golden Gate bridge in San Francisco, or swim with NESCAC conference swimmers at Nantasket Beach, or evevn with Olympians at Boston Harbor. Swim Across America began as a grassroots organization with events developing organically. Now, those events raise hundreds of thousands of dollars – and money raised is still given to local beneficiaries which happen to be some of the best in the world. Now, we are nationwide and bringing Swim Across America events to the whole country, from coast to coast. The SAA community is made up of swimmers, friends, parents, sons and daughters, teachers, coaches and the well – meaning. Many of their most loyal supporters aren’t swimmers, but honor family and friends by donating, volunteering, or by helping us raise money in their continued effort to find a cure. Join the SAA family and Get Involved. Swim Across America is the inspired sequel to a triumphant Run Across America completed by the two founders of SAA in 1985. This eight-month journey, which spanned the country from Boston to Los Angeles, raised over $1 million for cancer research. What makes this trek all the more remarkable is that one of the determined runners, a 22-year-old from Fairfield, CT, had lost his right leg to cancer a decade before. Following college graduation, these two childhood buddies embarked on their mission, making history in the process. Together, they instilled hope in all who fight this disease and heightened consciousness about overcoming this frightening diagnosis. It was in 1987 that Jeff Keith and Matt Vossler decided to bring their cause back home and transitioned from running to swimming for a cure. With a focus on raising money and awareness for cancer research, prevention and treatment, Swim Across America was chartered as a 501c3 nonprofit organization. 2010 will mark the 24th year of Swim Across America. During that time, they have grown from a single event in Nantucket, MA, to dozens of events across the U.S. From New York to California, they are swimming across America. As they usher in the new year, they look forward to the initiation of their newest programs: New Open Water Swims in Baltimore, Nashville and Providence as well as the National Pool Program – an initiative created to help people all over the country hold their own pool swims. To date, Swim Across America has raised over $30 million for cancer research, prevention and treatment. Their major research beneficiaries- Dana-Farber Cancer Institute in Boston, Memorial Sloan-Kettering Cancer Center in NYC, Cardinal Bernardin Cancer Institute in Chicago, Cancer Support Team of Westchester Country, Children’s Hospital of New York-Presbyterian, the Seattle Cancer Care Alliance, The Sidney Kimmel Comprehensive Cancer Center at Johns Hopkins and UCSF Children’s Hospital in San Francisco – all recognize their funding source as instrumental to their success. Without Swim Across America, much of their research would be left with no monetary support. The 2010 events unite recreational swimmers, competitive swimmers, Masters swimmers, Olympians, kayakers, boaters and hundreds of volunteers all committed to pursuing a cure for this devastating disease. In all, over to 3,000 swimmers, ranging in ages from seven to 78, participate on an annual basis in their events. However, in this one year alone, 1,334,000 cases of cancer will be diagnosed in the US. Every man, woman and child is somehow affected. This staggering statistic offers compelling proof of the need to continue devising new approaches to research and treatment. Swim Across America is unique in many ways. On the one hand, their swims are high-profile events which attract Olympic legends and hopefuls, rising swimming stars and recreational swimmers, all of whom elevate the amount of money and awareness to the cause. On the other hand, it is a grassroots fundraising endeavor which belongs as much to the sponsors and volunteers as it does to the swimmers. In both ways, Swim Across America enables everyone involved to experience the thrill of victory because everybody wins the race when a cure is indeed found. By supporting current work on the frontlines of cancer research, you can help cut through the waves towards innovative treatments for tomorrow.