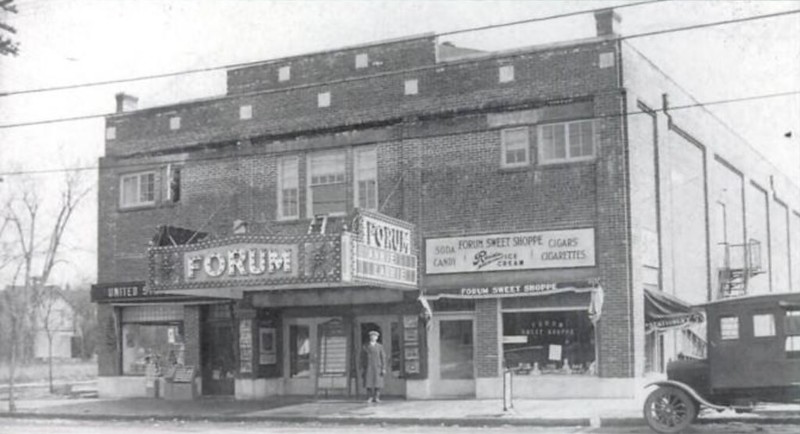 James Forgione, the manager of the Metuchen Theater, and H.A. Rumler, a local entrepreneur, established the Forum Theater, naming it by combining the first three letters of their last names. The Forum Sweet Shoppe, was located in the south storefront, and the United States Stores had an early borough outlet in the north storefront. The 1936 film, Annie Laurie is shown on the marquee. 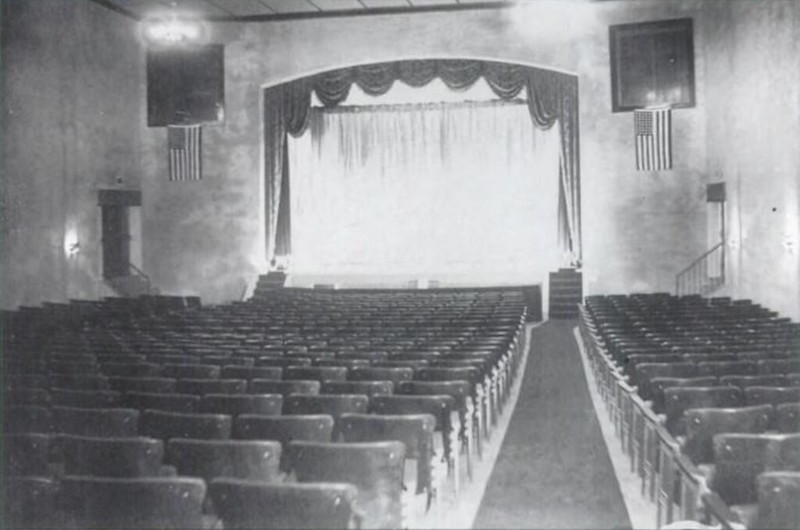 The stylish and inviting interior of the Forum Theater was designed in the sleek Streamline Modern style that featured curved walls and smooth surfaces. The lobby provided the comforts of home with comfortable wicker chairs and sofas atop oriental rugs. The theater opened in March 6, 1928 and showed movies for more than 50 years. In 1983, a nonprofit professional theater was established in the building. 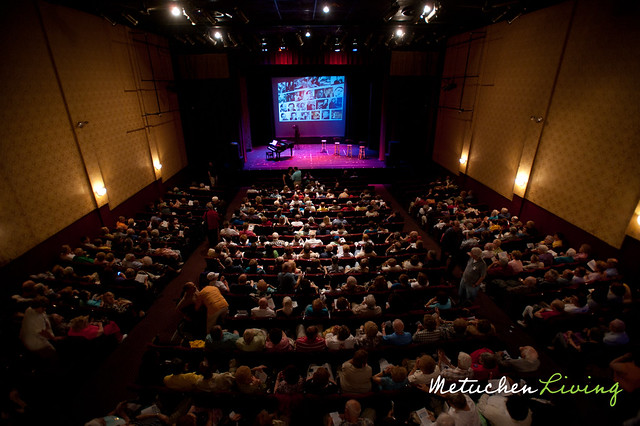 The Forum Theatre Arts Center (FTAC) has been central New Jersey’s cultural arts hub since 1928 when it was built as a theatre and vaudeville tryout house. Eventually, the FTAC became the neighborhood movie house. In 1983, the theatre was purchased by Marlowe Enterprises, a Metuchen-based corporation and operated by Entr’Acte, Inc. (a non-profit 501c3 corp.) for the next 23 years. At the height of its success, the FTAC was a thriving regional theater, presenting hundreds of American and World Premieres with an emphasis on musical theatre, as well as numerous A-list concert events and children’s shows. The FTAC took a two-year hiatus and reopened in June 2009 newly committed to providing opportunities for all children to participate and learn through the art of theatre. We are pleased to announce the FTAC has been restored to its original glory, serving as the cultural focal point of central New Jersey.
The FTAC is a nonprofit performing arts organization with the mission of educating, entertaining and enriching the lives of young people and their families through the art of theatre and performance. We aim for a full schedule of cultural events including concerts, dance and other performances, movies and recitals, as well as providing the community with a center for local events. Our inspiration is based on the belief that children and residents deserve the very best; that process and product are one; and that art and education can skillfully and sensitively conspire to share a common soul.
The FTAC Performing Arts School, known as Stars On Stage, has developed a comprehensive after-school performing arts curriculum including creative drama, acting, dance and voice instruction. The FTAC’s summer program features a musical theatre day camp, an acting intensive program for teens and weeklong introductory classes. An Open Letter from the Forum Theater Director Peter Loewy

To All Our Loyal Patrons,
I know many of you have been coming to the Forum for years and I appreciate the fact that we have so many loyal and dedicated patrons. The Forum is one of the only single screen privately owned theatres in the State. This year movie companies are going to put many independent theatres out of business by going digital. There will be no more films distributed in 35MM. A shame to say the least. And for theatres to transfer to digital is extremely costly. For that reason I will be concentrating on bringing more and more live programming to the community. Children’s musical theatre classes and live shows for kids as well as musicals and plays for adults. And yes we will still present the best in film. 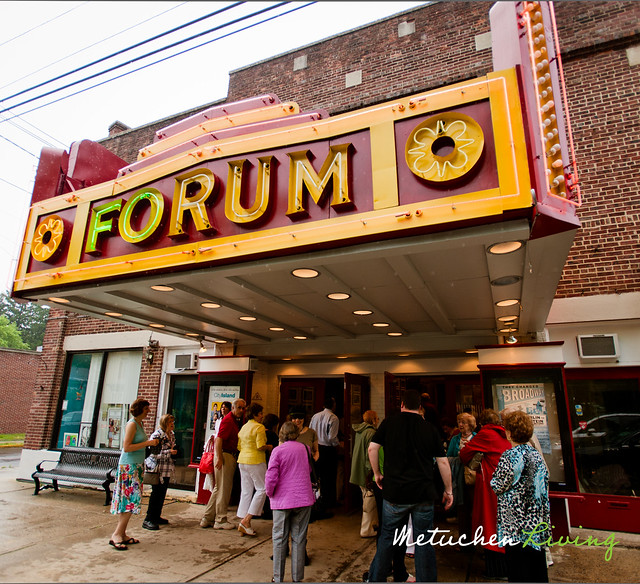 With temperatures reaching record lows and snow it has been a challenge for us to keep the theatre as warm as we would like and I sincerely apologize for that. We have also experienced roof issues with water leaking down a couple of areas along the walls of the theatre ruining the gold fabric and some of the lighting sconces. I rarely ask for help but it is now time to reach out and ask YOUR help in raising the funds needed to improve the theatre going experience at the Forum and help keep the arts alive here in Metuchen with first class films and live stage productions. We are hoping to raise $150,000.00 for capital improvements over the next year. 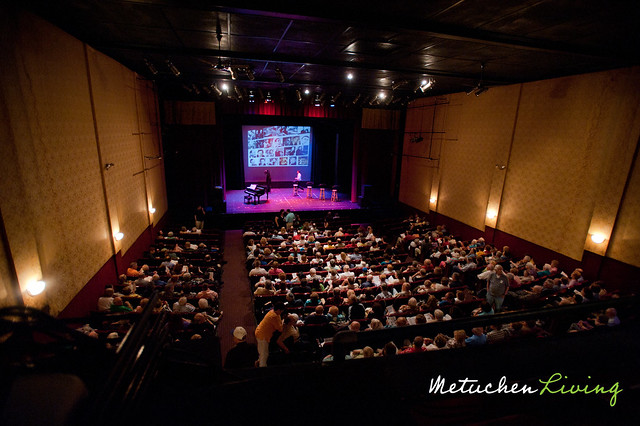 New heating and air systems are our priority, new fabric and lighting on the walls, new carpeting and improved concession stand area. We are not just asking for monetary help. We are asking all our patrons that if you know of a heating company, roofer, interior designer, plumber, fund raiser or anyone that can help with in kind services we would be very happy to hear from you. Donations are obviously a priority in helping to move forward as quickly as possible. If your interested in getting involved please email me, peter@forumtheatrearts.org. 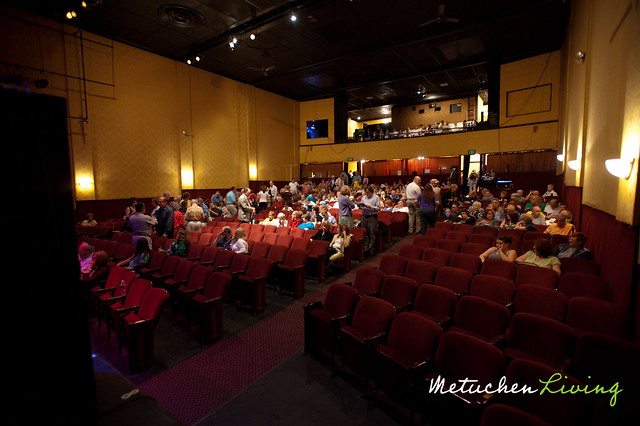 That being said I would publicly like to thank the wonderful Mohtadi family, Madi, Nabil and their daughters Idi and Danya who have been with our Stars On Stage program for many years now. They donated their time, money and dedication to our program by remodeling the dressing rooms so our students would have a colorful, safe new environment to enhance their experience at the Forum. They are true supporters of the arts and I can not thank them enough! Speaking of Stars On Stage, this spring we will also make musical theatre classes available to middle and high school students. 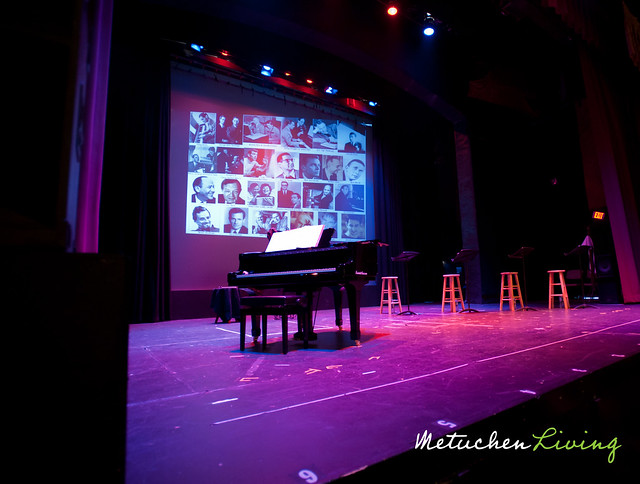 Thanks for listening and most of all for your support!
Peter J Loewy Founder/Producing Artistic Director

By Mark Di Ionno via The Star-Ledger METUCHEN — It is 6 p.m. on a Friday evening and the house lights are turned on, dimly lighting the Forum Theater. The irresistible smell of buttered popcorn begins to waft through the empty building. Inside the projection booth, reels are spinning as the night’s feature film is loaded.
It’s movie night in Metuchen, different than any almost any other movie night in any other town in New Jersey because the Forum is one of the last single-screen downtown theaters in the state.
There is a reason for that.
“It ain’t easy,” said Peter Loewy, who bought the theater in 1983 and for almost 30 years has resisted temptation to sell it.
“There’s so much competition,” he said. “We survived the multiplexes, now the multiplexes are serving dinner. We show first-run art films, but having only one screen obviously limits your audience. We do live theater but can’t compete with bigger, regional theaters. And we’re not subsidized. But we keep going.”
The Forum has not become a Rite Aid or Walgreen’s for two reasons: First, Loewy promised the former owners he would keep it a theater and, second, he still loves keeping that promise.
Loewy was a Metuchen kid, a boyhood pal of David Copperfield, who had his own show business aspirations. At New York University, he was a theater major and, through friends, met Michael Stewart, a major Broadway figure who wrote the non-musical parts for “Bye-Bye Birdie,” “42nd Streets” and “Barnum” to name a few.
“I became an assistant to him,” Loewy said, “and through him I met people like (producer) David Merrick and (composer) Cy Coleman, real legends of Broadway.”
But the bright lights of the Great White Way weren’t as alluring as the street lights of Main Street, Metuchen. “I used to come to this theater as a kid,” Loewy said. “This is where we went to the movies.”
When he heard the family-owned theater was for sale, he put together a partnership of five and scratched up the cash and financing to buy it for about $200,000.
“Part of the deal was that you had to keep it as a theater, so I think we were the only people interested,” he said.
But that condition was verbal only. Loewy is free to do what he wants and what he wants is to keep the Forum, as is: A throwback to the day when every Main Street had a downtown movie house.
So there is a candy counter with the old, sweet stand-bys like Twizzlers and Sno-Caps. The slanted, carpeted lobby is decorated with movie posters. The small balcony is lit by the flicker of the projection room.
On the screen are not big, loud Hollywood blockbusters. Loewy goes the art appreciation route.
“I love to discover quality films and bring them to my audience,” said Loewy who goes to film festivals — New York, Tribeca, Toronto — and selects his own movies.
He has, however, expanded the theater’s repertoire. He runs children’s theater programs and camps, which produce three musicals a year. He rents to independent producers. He holds events like “Alfred Hitchcock” nights and horror night and other mini film festivals.
“I enjoy educating people about the art of film,” he said.
Recently, he showed “Secretary,” a 2002 erotic film starring Maggie Gyllenhaal as a sexually submissive worker and James Spader as her dominator boss. He drew the “Shades of Gray” crowd for a discussion and the movie.
“They had a ball,” he said. Last year, he hosted a free movie for kids. It was Charlie Chaplin’s “Modern Times.”
“It was great to watch these kids be entertained, to see them laughing, at a black-and-white, silent film. Where else are they going to see that?”
Jackie Mason has told his jokes there. Robert Klein’s HBO special was filmed there. Kenny Vance and The Planotones have doo-wopped there. Al Stewart and Amy Mann have played to sold-out audiences. In October, there will be a wedding on the Forum stage, the guests seated in the plush, red velvet covered seats.
“The theater rents for about $300 an hour, depending on what you need, like sound and lights,” he said.
It pays the bills, and keeps Loewy in business for another day.
“We’ll keep going,” he said. “As long as we can. I think we’ve got a lot to offer.” 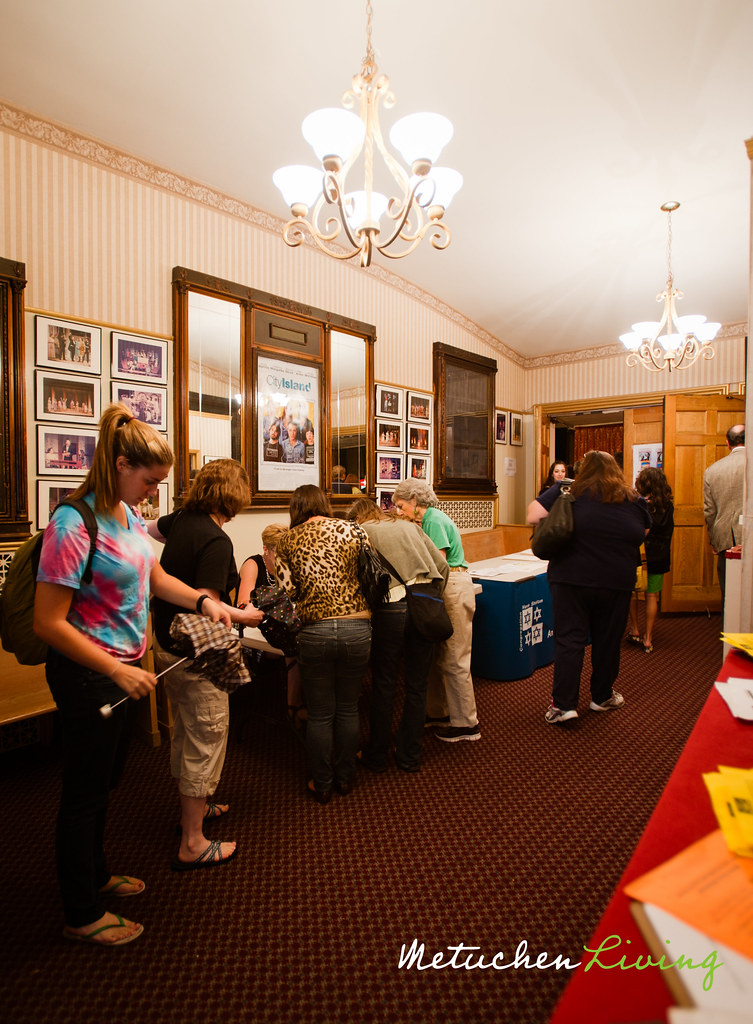 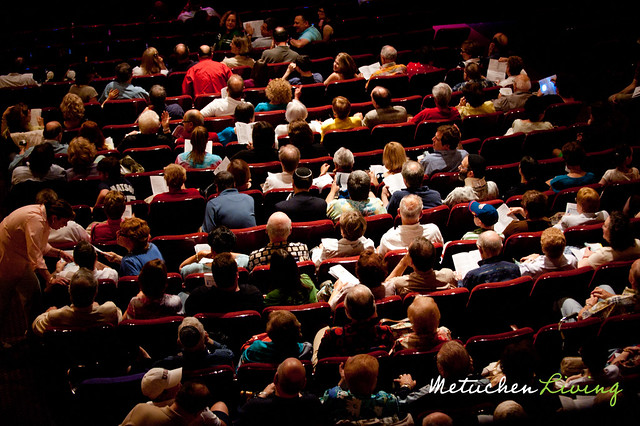 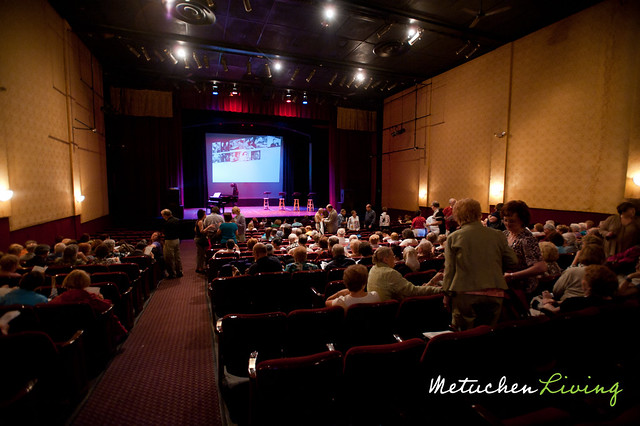 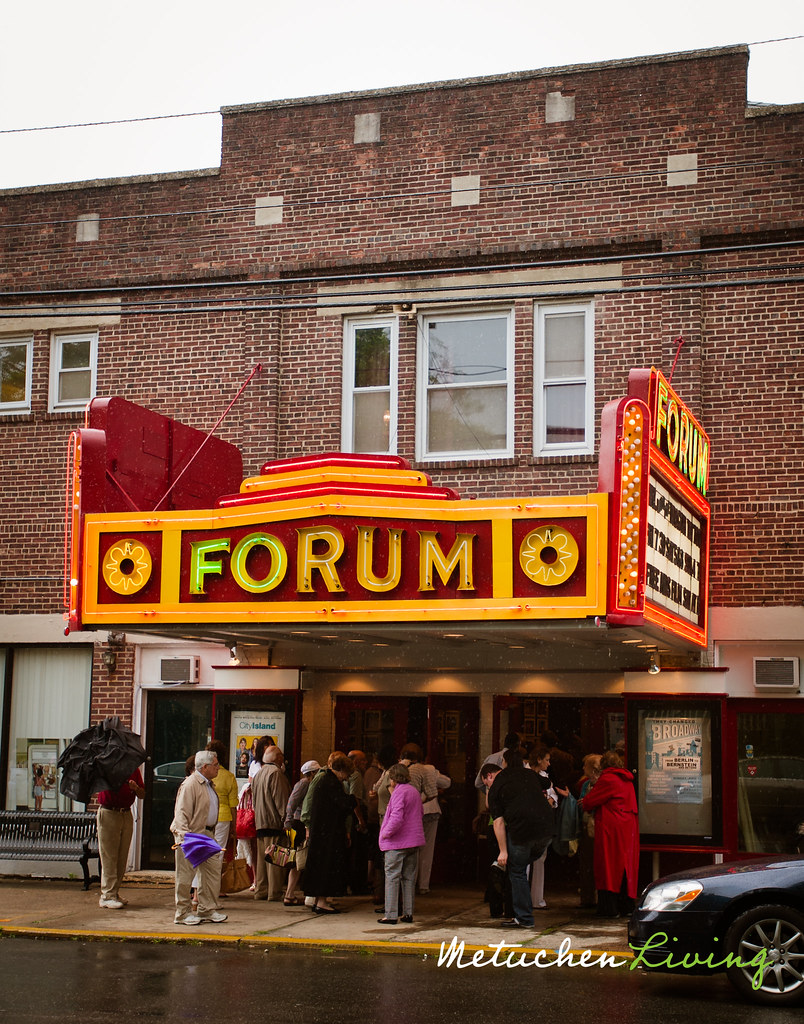