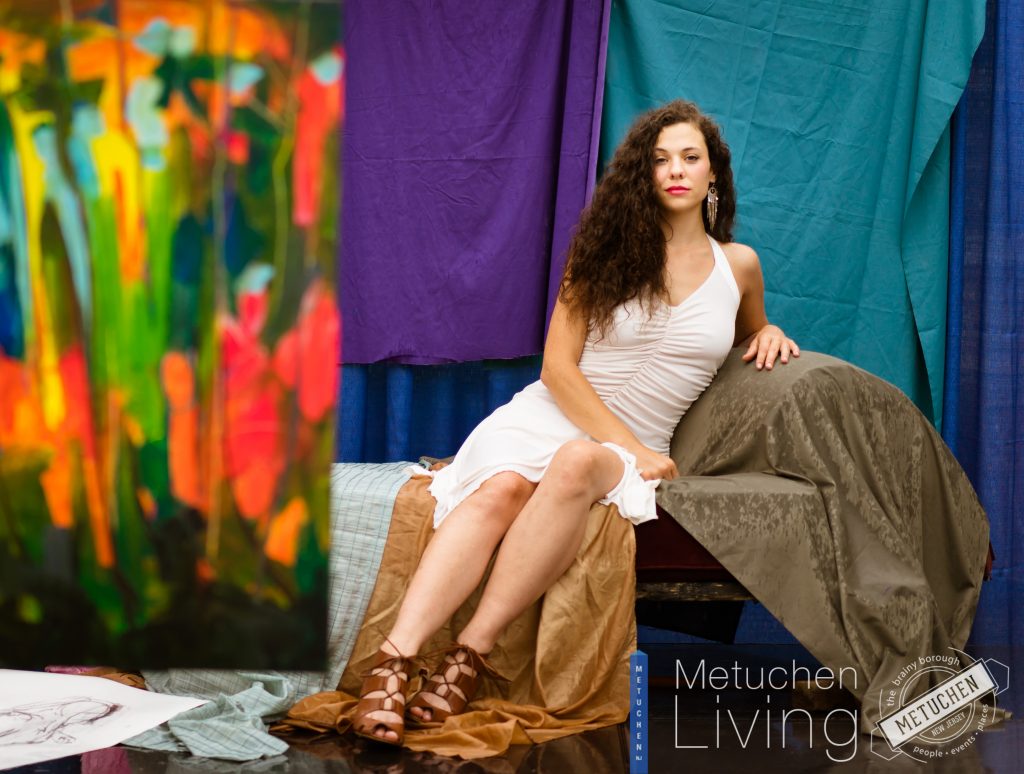 (Model: Nadine Stevens)
Did anyone notice the artists magnificently painting over the drizzle? The artists and the model didn’t mind the rain! And the results were awesome! 4-on-1 Painters on Canvas: The Surrealist Vision. Featuring four local artists painting live: Easton Davy, Ed Wetzel, Billy Seccombe and Enrique Zaldivar. 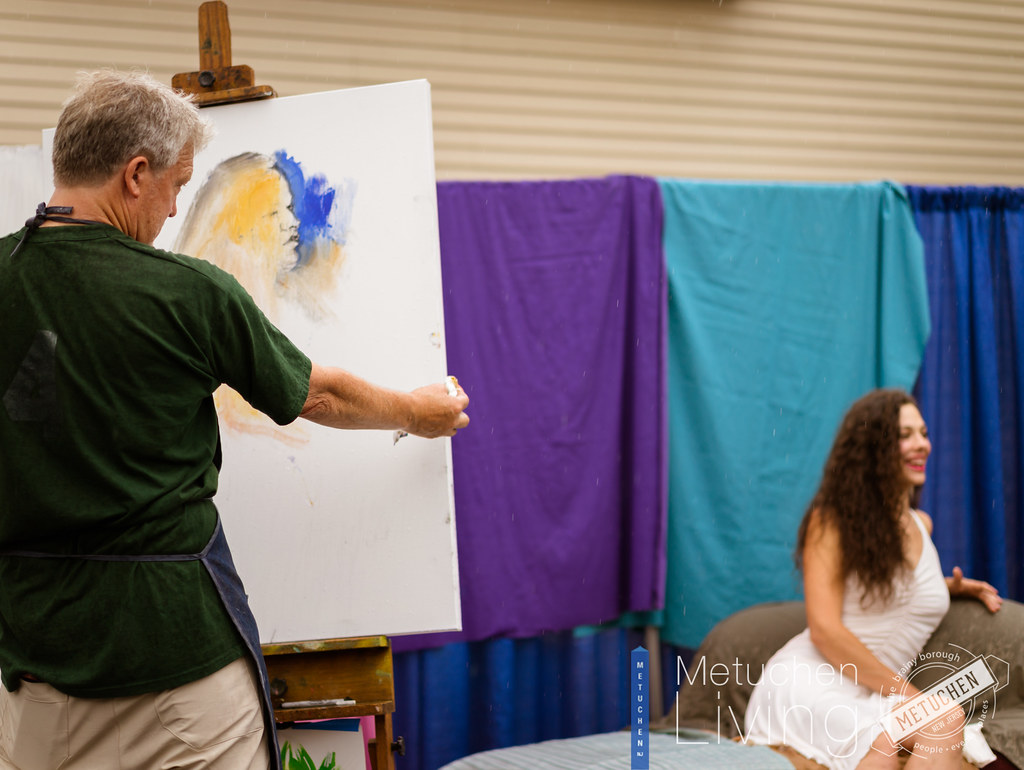 Ed Wetzel: An iconic and original player for Rovers International Soccer, Ed Wetzel has been deeply involved in the Metuchen town soccer program since the early 80’s. His love of both art and soccer has never wavered and through the years he has carved out the perfect career balance between the two. In his studio, Ed teaches the fundamentals of art in a fun-loving manner that only someone who has coached youth soccer for over 30 years could. He is a beloved founder of many local drawing groups for seniors and adults alike. His  work is prominently and permanently featured in The Metuchen Savings Bank, Metuchen Borough Hall, Metuchen Library, Metuchen YMCA, Sakula Yoga Studio, and at Swain’s Gallery. 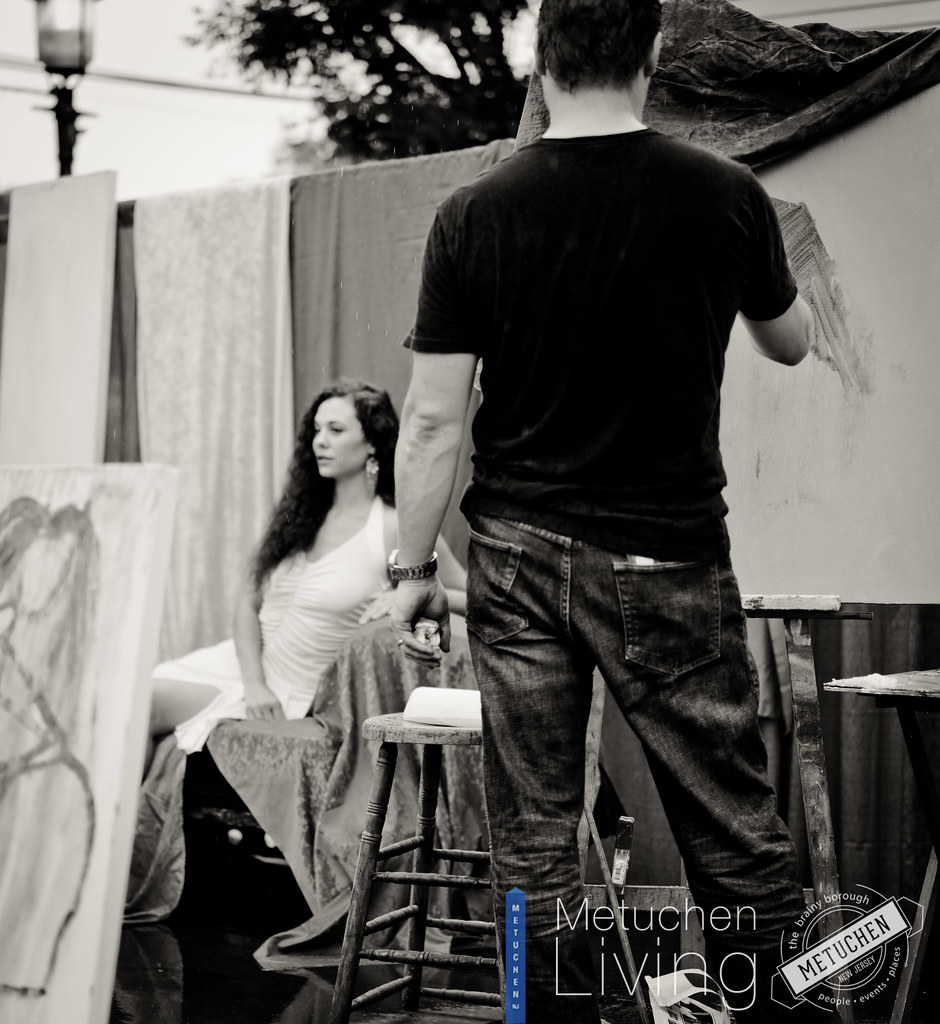 Billy Seccombe: By taking a unique approach to oil painting in an academic manner Billy Seccombe’s work captures a classical realism with particular attention to rendering the figure. His latest paintings seek a poetic aesthetic and an ethereal quality, which often depicts a figure with decorative elements, text, and thick impasto paint. By letting the paint flow and careful not to overwork the canvas, he creates bold brush strokes that convey a sense of life and energy in his subjects and an intimacy in his models. “My work derives a sense of comfort and of warmth while employing elemental accents such as patterning and props.” A graduate of Syracuse University with a BFA in illustration, Seccombe grew up in Rochester, NY. At a young age he was inspired by Rochester based artist Ramon Santiago, whose theatrical style can at times be seen in Seccombe’s work. “I want to have a dialogue with the audience” says Seccombe of his new work, which invites the viewer in by conveying thought and emotion with a delicate sense of intimacy by looking in. Seccombe attended Syracuse University and studied illustration under the direction of Bob Dacey. In 2000 he received a Bachelors of Fine Arts degree in illustration. Seccombe has also studied academic approaches to painting and drawing at the Art Students League of New York as well as the the New York Academy of Art under the guidance of such names as Nelson Shanks, Sharon Sprung, and Robert Armetta. Seccombe has shown at various galleries across the United States and has been recognized with multiple awards and honors. His most recent works were viewed as part of his solo exhibition titled, Looking In, and were also exhibited as part of the Times Square Art Show. He currently resides in Metuchen, NJ with his wife and son. 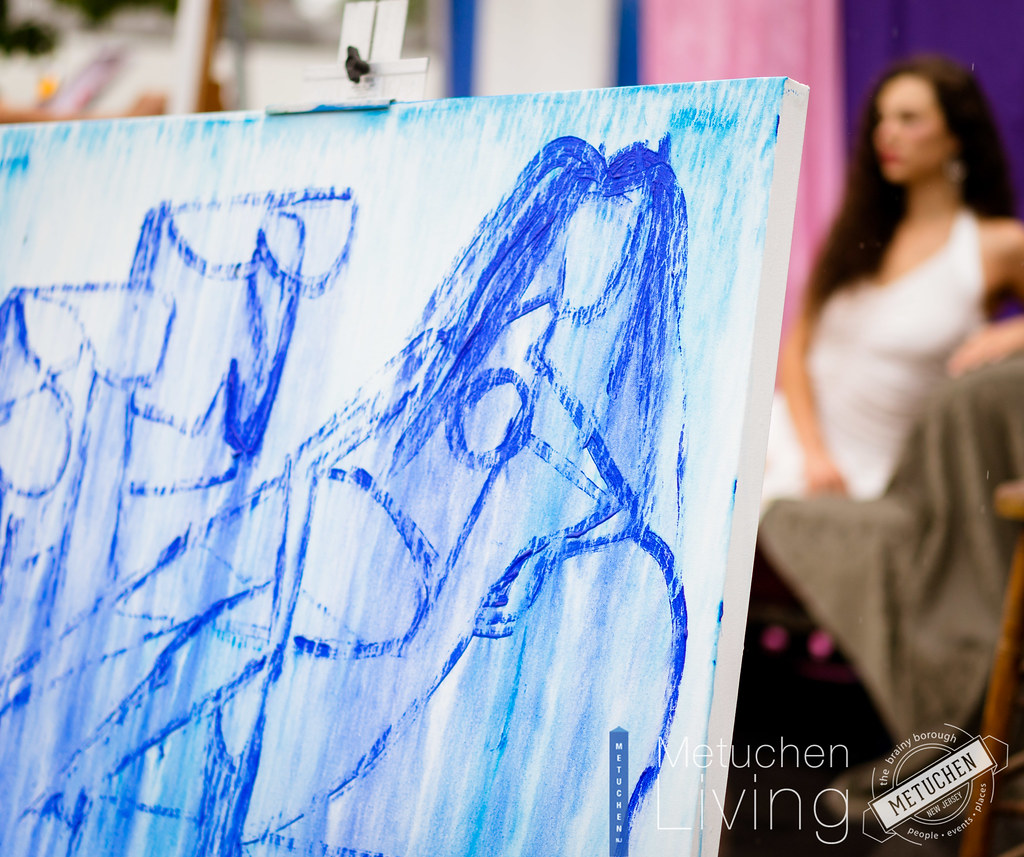 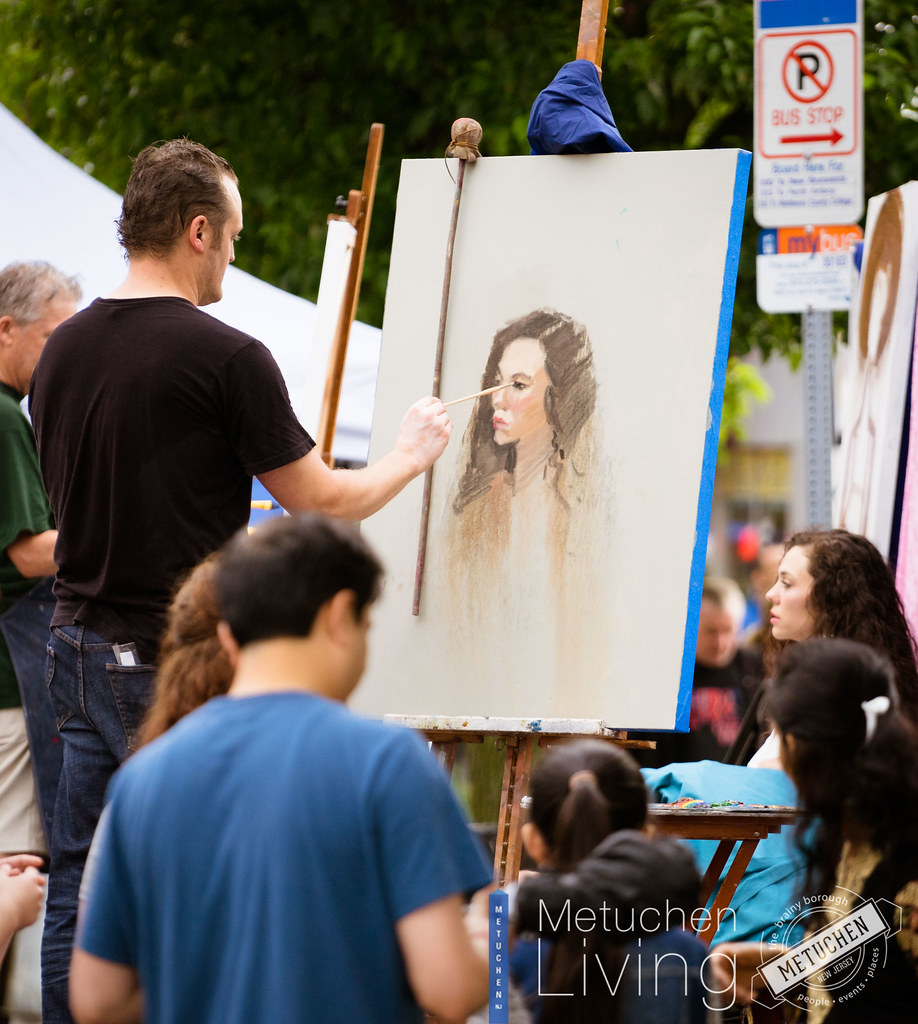 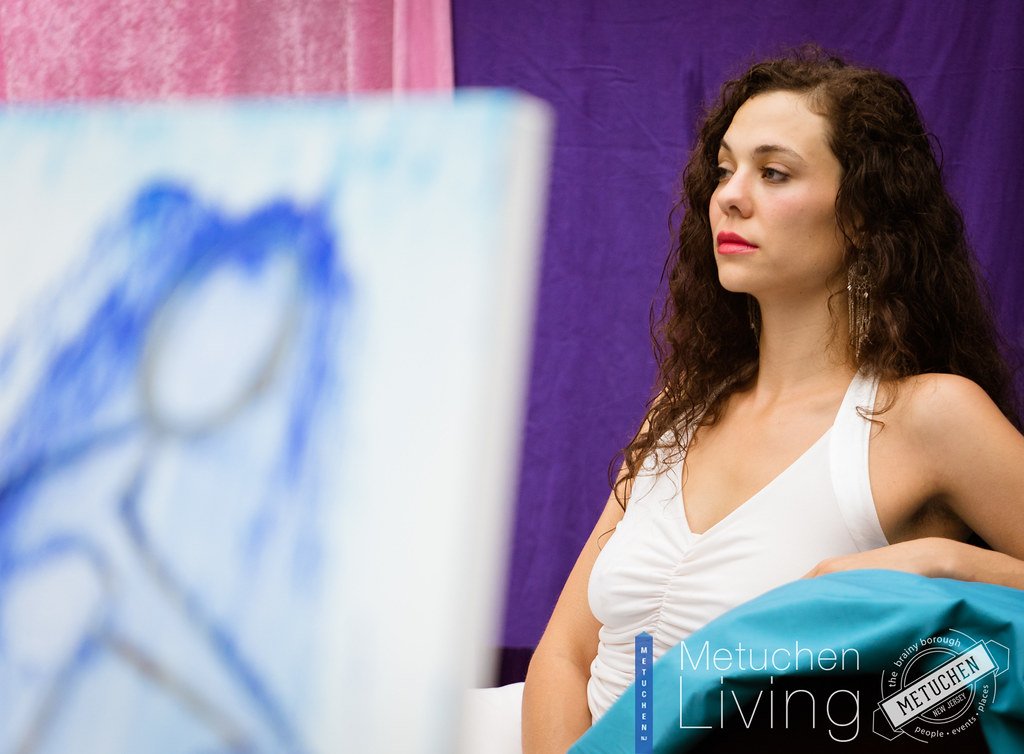 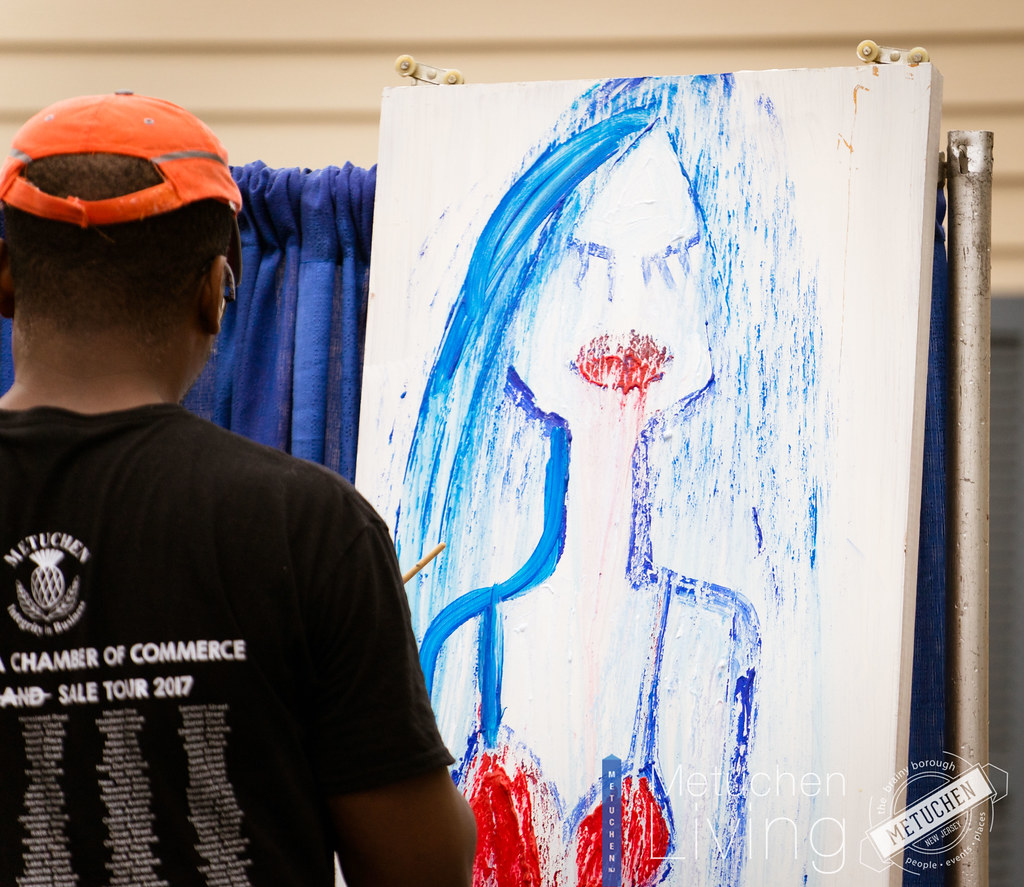 Easton Davy: This internationally recognized artist is currently represented in The Netherlands and New York. Recent projects include Album covers for Blue Note Records and live painting during European Jazz festivals! For me Art is created for the soul and to create inspiration… ENJOY! The New York artist EASTON, his work has appeared in JazzTimes, BlueNote Records, The BRAVO Television Network, The NBA Television comercial, he shows in Paris, New York and California. Also currently represented in Philadelphia by the DEZIYNERS GALLERY, represented in NewYork City by ALLERTON ARTS, represented in Paris, France by THE HEART GALLERY in the Bastille Section of Paris. The Philadelphia Daily News wrote this article about Easton in October of 2000: IMMIGRANTS’ SON THRIVES AS AN ARTIST. By Anne R. Fabbri/ Philadelphia Daily News 2000 Easton Davy has the four most important ingredients for ‘making it’ as an artistalent, grit, innovation and a loyal patron. Add a heaping dose of a supportive. family and you have the perfect recipe for a wonderful exhibition at Dizyners Gallery, 65 N. 2nd St. There, Davy’s art takes over and the fun is all ours. He was born 37 years ago in the Bronx, to parents from Jamaica, who had dreams of moving to the Amish countryside in Pennsylvania. When Davy was 11, his parents bought a house with 30 acres in Montrose, Pa., packed up the four children and moved. Recreating their memories of Jamaica, they raised chickens, goats and pigs. ‘Most of the people in Montrose had never seen black people before, except in ‘The Jeffersons,” said Davy. ‘Then we moved in, with our New York clothes, bell-bottoms and every thing. It was very difficult for them the towns people, but in the end we became very close. It was great.’ His early life resembles every successful immigrant’s son’s tales: his father working as a welder; his mother a nurse’s aide with dreams of educating four children so they could have secure jobs and hopes for the future. His older brother graduated from business school and became an accountant. Something else was in store for Easton, the youngest. ‘I always knew I was an artist. When I was 4 or 5 years old, I drew pictures of my father running for the bus,’ said Davy. Davy’s career took off with jobs in Berkeley, Calif., and New York City, and time off in between to paint 24 hours a day. Now he works in all media, in cluding silkscreen prints of famous jazz musicians from the past. Davy sells at art fairs, such as the one in Manayunk each spring. There, he met his patron, Adrian J. Moody, a noted Philadelphia attorney who began collecting his work. An art fair in Montclair New Jersey and a follow-up Christmas card to collectors resulted in a call for some drawings for the National Basketball Association’s publicity department. ‘When someone buys your work, they are buying a piece of you. You have to stay in touch,’ Davy said. ‘Every Christmas, I send each patron cards I have made, and I do the same every time I move, which is almost an nually. It always helps.’ Now he has settled, for the present, in Jersey City. There, he tacks up his canvases on his living room wall and paints. He likes the challenge of a new medium for exploring his ideas and giving them a different form. He is someone you are going to be hearing about, so you don’t want to miss his current exhibition on view until Nov. 28. 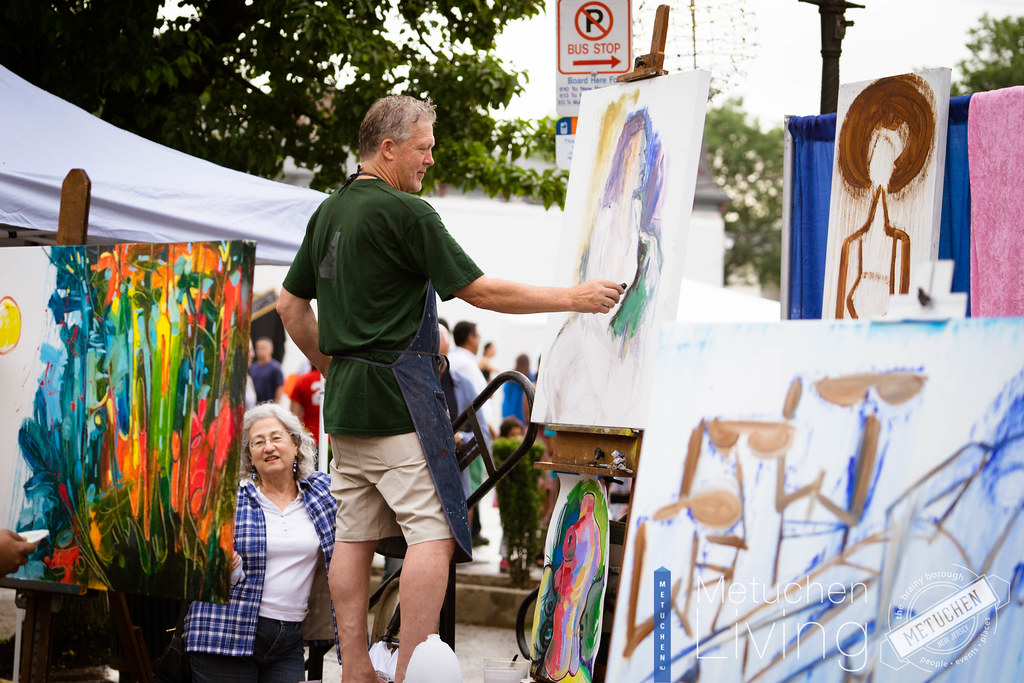 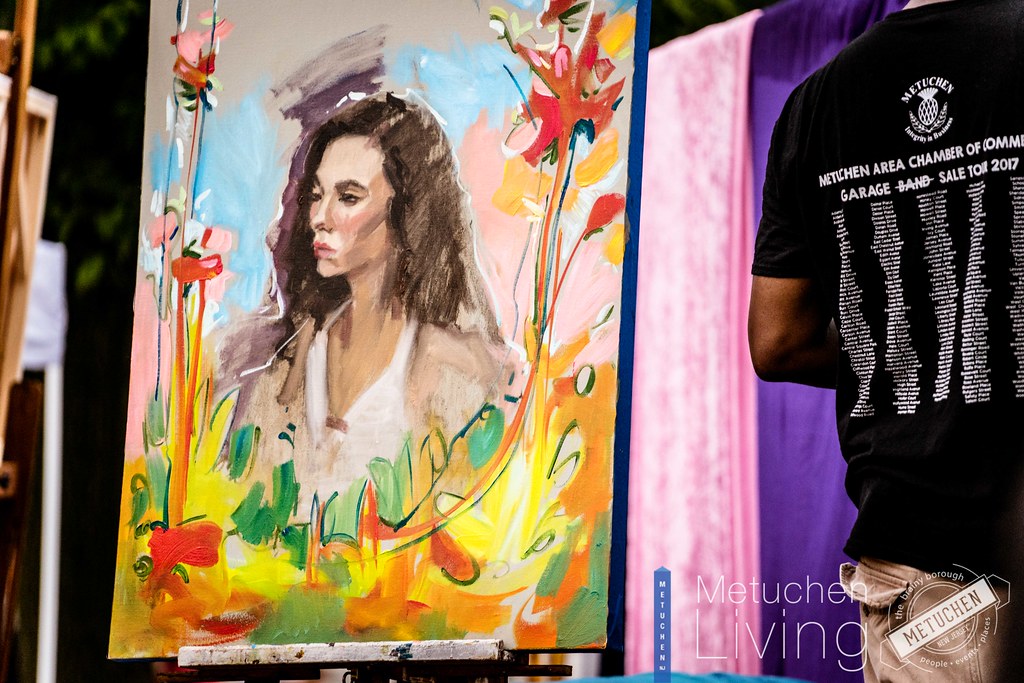 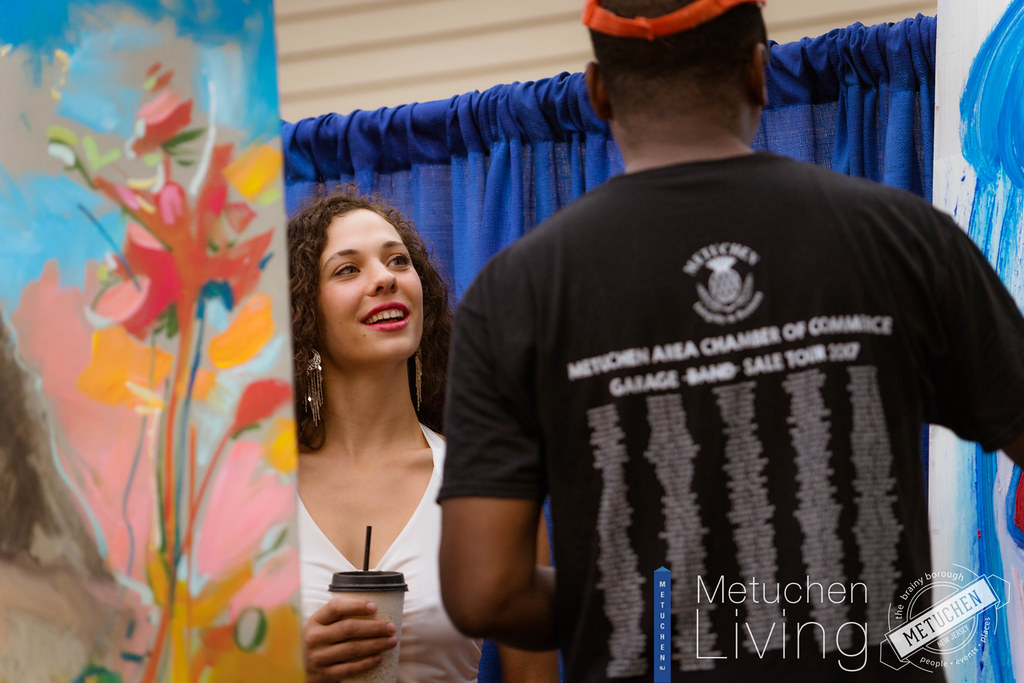 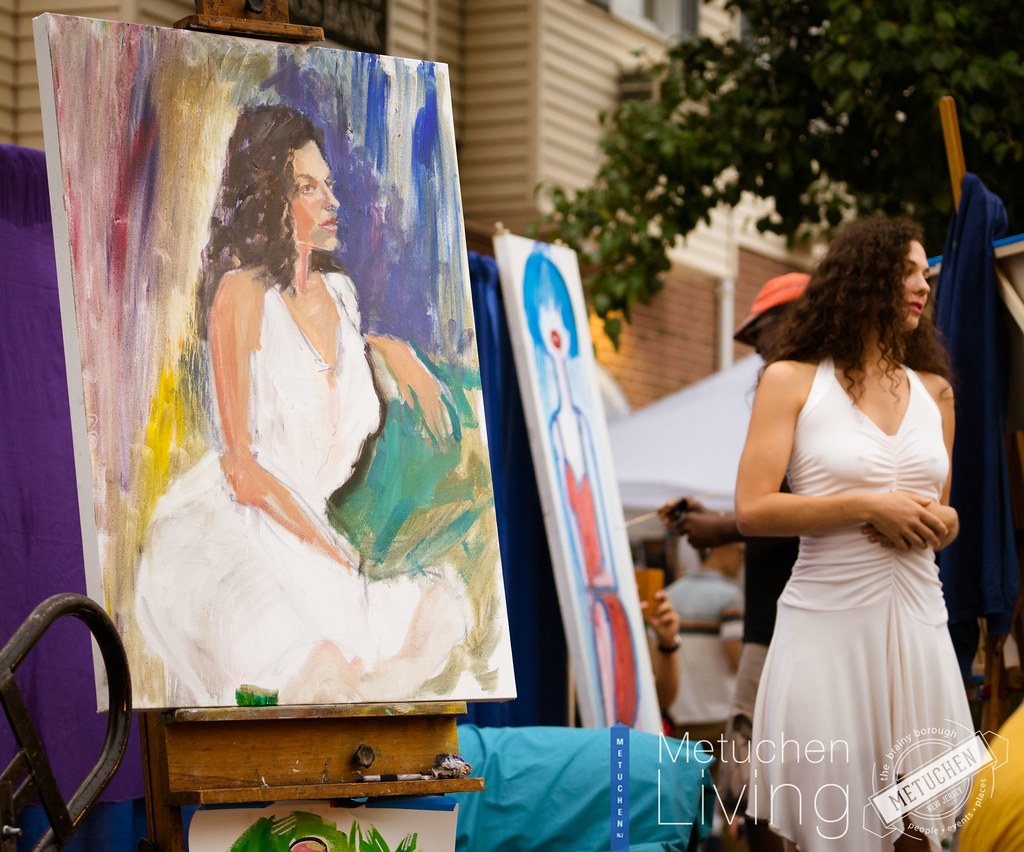 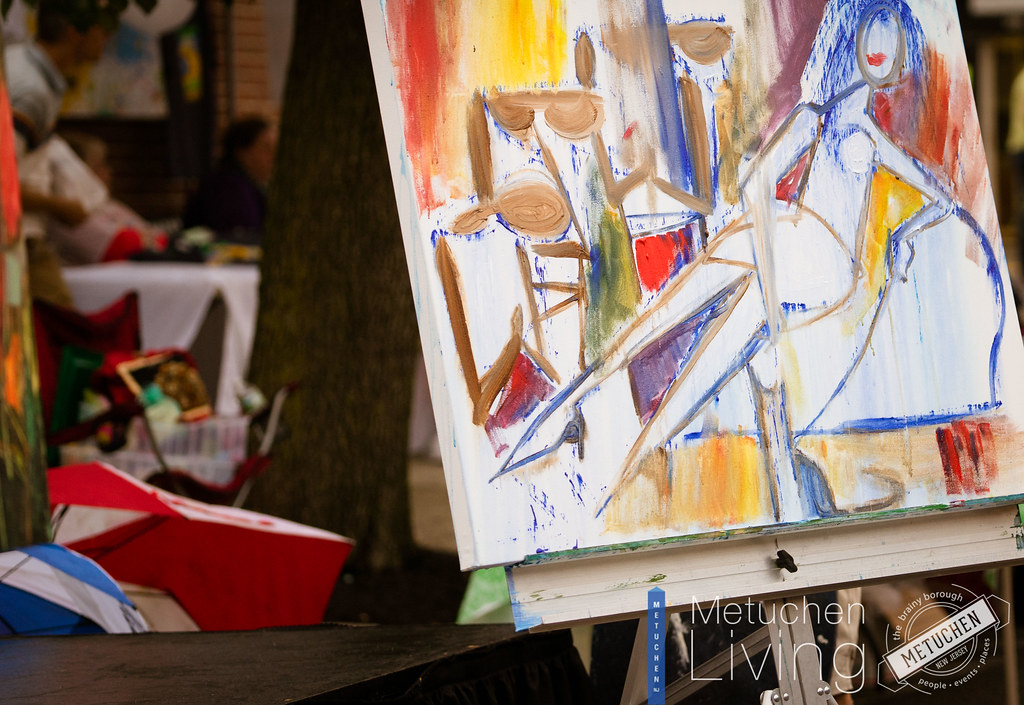 Enrique Zaldivar: Holguin, Cuba. July 22, 1988. Currently lives in New Jersey, United States. Enrique Zaldivar is a cuban painter based in the United States, graduate of the Professional Academy of Fine Arts “El Alba” in Holguin, Cuba. To date he has done several solo and group  shows.  His  works appear in several private collections, institutions and corporations throughout the United States and also transcended the borders to countries like Canada, Mexico, France, Dominican Republic, Peru and Cuba. Zaldivar’s paintings are characterized  by the presence of nature in general from where he takes his main inspiration, but not to copy it, but to transform it through his eyes and his mind, to give us a unique and unrepeatable creation. Zaldivar mainly uses  acrylic for its dynamism and  expressive possibilities. We see in his works an intense and particular use of color, with a conscious use of complementary colors to create harmony and balance. There are vibrant colors with few mixtures that become a way to illuminate the canvas, a mixture of  the tropical light of Cuba and the explosion of autumn colors in the United States. For Zaldivar each stroke is a way of reflecting life in its wide spectrum of situations, shows us its inner world  and  philosophy of life. With a language without  rambling  and simple opens the windows to other worlds. There are no secrets in his art. His influences are very diverse as, Impressionism, Cubism,  Abstraction, Surrealism and Pop Art. 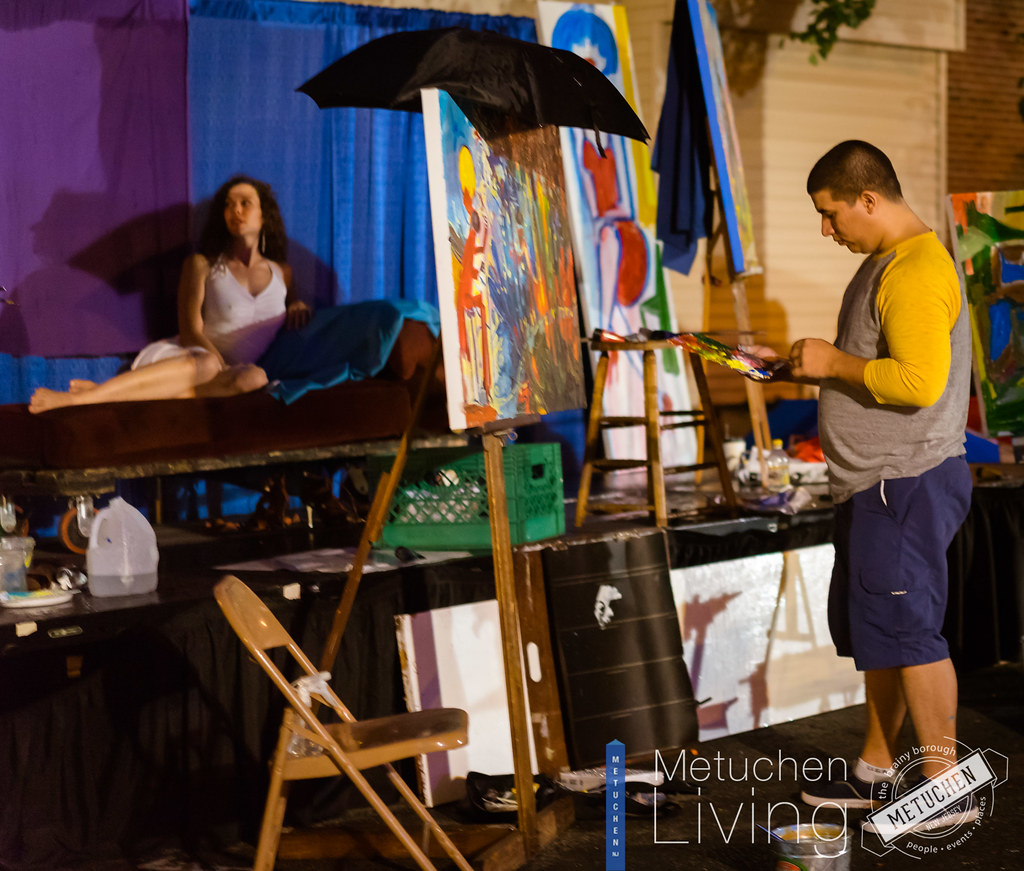 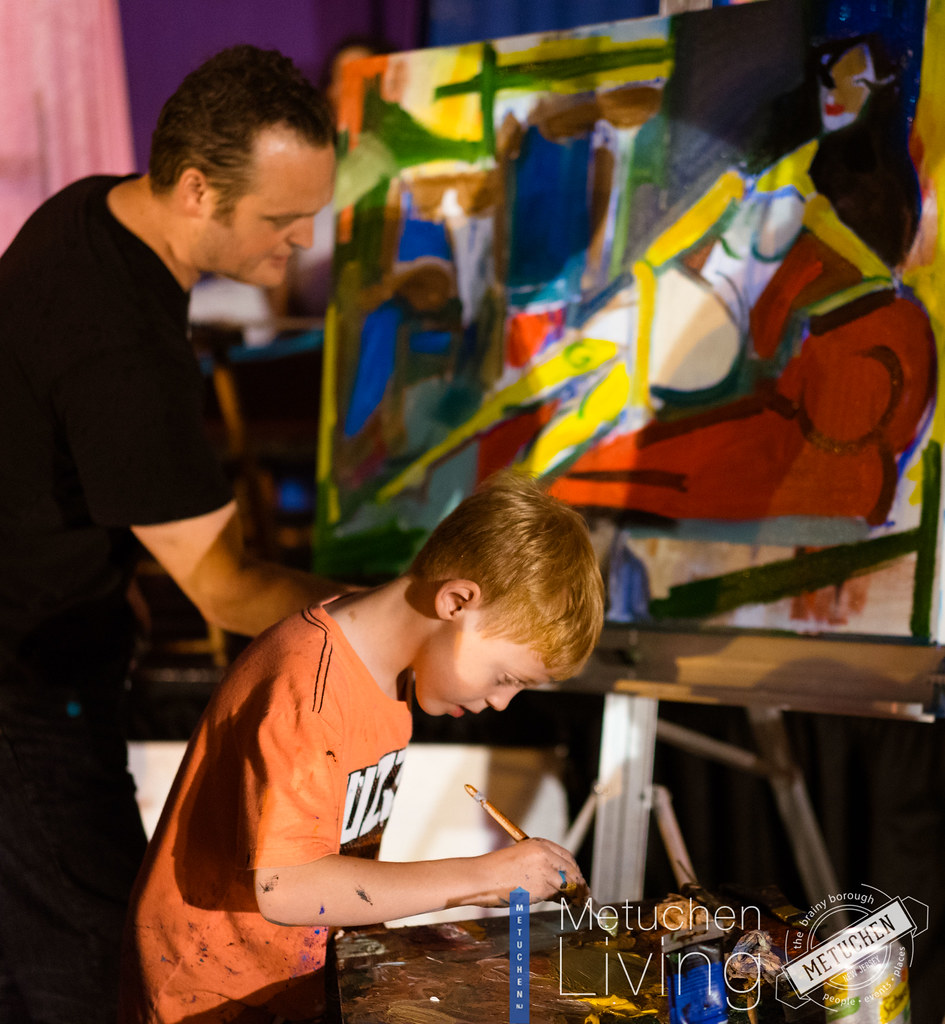 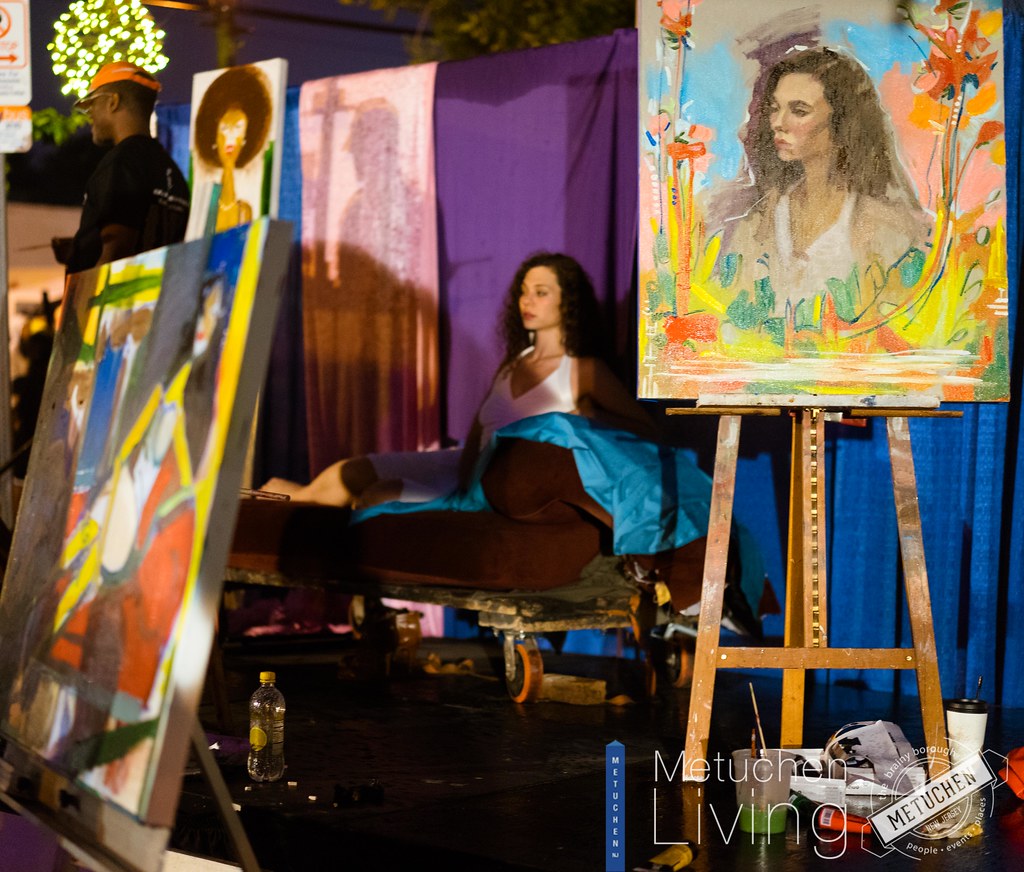